In 1888 Naradhan woolshed was built and probably designed by a man who was considered to be the most famous of the woolshed builders of the Riverina. William McFadzean of Narrandera. The shed was built for the owner of Naradhan station, and then shortly afterwards passed into the hands of Thomas Templeton, a great Grandfather of the old owner, and was used as a depot shed for all the surrounding farms until well into the 1930’s.

The shed is made from cypress pine and built in a “T” formation. In the early days of blade shearing it appears to have been a 28 stand shed, then in 1903 overhead equipment was installed, powered by an oil fired single cylinder engine and the number of stands reduced to 14. These days it has reduced right down to an electrical 3 stand and the owners at present run only a small amount of sheep.

During 1996 with the assistance of the heritage grant, the shed was fully restored externally.

The shed was officially re-opened by the mayor of Bland Shire Mr. David Bolte on Saturday 4th October. 1997. Over 300 people attended on the day with a family picnic day and viewing of the shed. 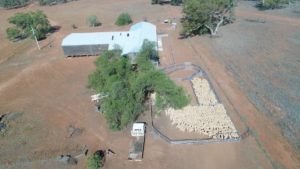